Even the Waves Obey Him 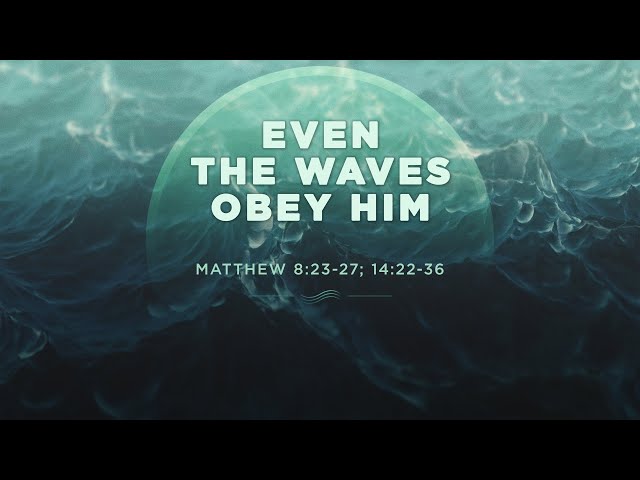 And when he got into the boat, his disciples followed him. And behold, there arose a great storm on the sea, so that the boat was being swamped by the waves; but he was asleep. And they went and woke him, saying, “Save us, Lord; we are perishing.” And he said to them, “Why are you afraid, O you of little faith?” Then he rose and rebuked the winds and the sea, and there was a great calm. And the men marveled, saying, “What sort of man is this, that even winds and sea obey him?”

And as they were eating, he took bread, and after blessing it broke it and gave it to them, and said, “Take; this is my body.” And he took a cup, and when he had given thanks he gave it to them, and they all drank of it. And he said to them, “This is my blood of the covenant, which is poured out for many. Truly, I say to you, I will not drink again of the fruit of the vine until that day when I drink it new in the kingdom of God.” And when they had sung a hymn, they went out to the Mount of Olives. And Jesus said to them, “You will all fall away, for it is written, ‘I will strike the shepherd, and the sheep will be scattered.’ But after I am raised up, I will go before you to Galilee.” Peter said to him, “Even though they all fall away, I will not.” And Jesus said to him, “Truly, I tell you, this very night, before the rooster crows twice, you will deny me three times.” But he said emphatically, “If I must die with you, I will not deny you.” And they all said the same. And they went to a place called Gethsemane. And he said to his disciples, “Sit here while I pray.” And he took with him Peter and James and John, and began to be greatly distressed and troubled. And he said to them, “My soul is very sorrowful, even to death. Remain here and watch.” And going a little farther, he fell on the ground and prayed that, if it were possible, the hour might pass from him. And he said, “Abba, Father, all things are possible for you. Remove this cup from me. Yet not what I will, but what you will.”